Cleansing Crystals: The When, How and Why! 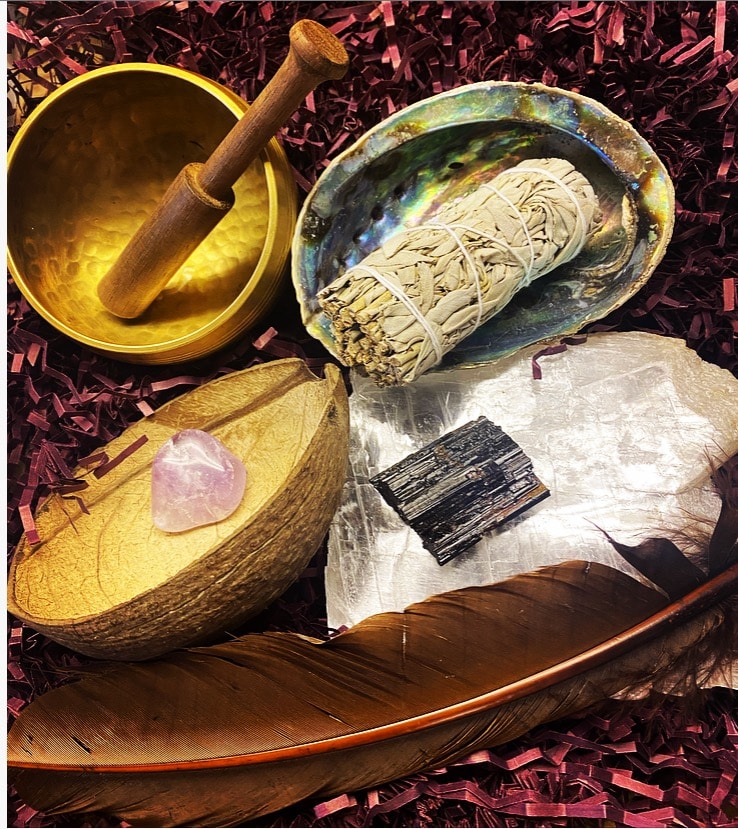 Cleansing Crystals: The When, How, and Why!

A question I often get asked is how to cleanse crystals. We are not talking simple dusting, but an ENERGETIC cleanse and clearing energies and emotions from our healing tools. (Just as important as dusting!)

It is natural for crystals that are used to eventually deteriorate, disappear, or become forgotten. I often think of them as having their own journey and we messy humans get to be part of their experience for a brief moment of their existence. Just because a crystal does change in color, crack or crumble away does not always mean it was because it was not “cleansed” or it had picked up “something that was too much for it.” Just as with everything on this planet, there is change and shift and everything has its completion point. Some crystals complete sooner than we expect, but it is not our job to determine when that gets to be.

It is however our responsibility to honor the healing and gifts the earth tools offer by being a good steward over them. By caring for your crystals and giving them the support they need, you have the potential to utilize them deeper and be able to use them longer.

How do I know when a crystal needs to be cleansed?

What happens if I don’t cleanse my crystals?

There is a difference between “charging” a crystal, amplifying its intention, abilities, and magnifying its purpose for our practice and “cleansing” to purify or clean.

Moon charging crystals allows the crystal to absorb the moon’s energy, focus, a light amongst that darkness into the crystal. This is ideal for amping up the nature of the crystal, or binding more that one crystal together to combine their separate purposes into one focused intention.  Crystal grids are most often placed during specific moon phases to ease and magnify intentions with the earth’s energy. (New moon tends to be releasing & manifestation, full moon most often with surging, while others can be about balance, simplifying and expansion depending on the phase.)

While the moon’s magic can clear a crystal of misalignment and influence, it is best to cleanse before moon charging. (Much like cleaning a house before you move in furniture, supplies or decorate.

Below are the deep cleansing methods, however, SELENITE is a great crystal to cleanse daily. Just place crystals, jewelry, or talismans on a slab of selenite each day to release overnight.

AMETHYST: Aides in dispersing heavy or intense energies and will break them up into smaller “particles” thus allowing movement and ease of clearing. (Much like taking a boulder and breaking up into sand.

BLACK TOURMALINE: Assists other crystals and objects by absorbing them into itself. (Much like a black hole)

When cleansing crystals, I love incorporating the four elements:

To discover what element to use to cleanse your crystals, you can start by exploring where it is found in nature or how it is initially formed.  A crystal formed from molten lava, for example, is most likely to be cleansed with fire, heat, or the sun. A crystal that only forms in damp, dark caves, is going to require a damp, dark environment to cleanse, such as burying in the earth. The Moqui Marbles will explode if placed in a fire and need to be buried to cleanse. Selenite will dissolve in water, causing your crystal to disappear and requires dirt.

Typically earth crystals are those found hidden in the dirt in the first place. They tend to be crystals for grounding, hence why they are able to purify IN the ground. They call it and bring all elements with them into the earth.

While you can bury the crystal in the dirt, I have found critters, water or other elements can damage, remove or disrupt the process. Rather, use a pot or bowl from the earth with as little human influence as possible. A coconut shell is my first choice, filled with some dirt directly from the earth. (A terra cotta pot and soil can suffice if needed)

Burry the crystal in the dirt with a prayer of gratitude for the assistance, the gift, the existence of this simple creation. Ask for cleansing and for it to be known when it is time to remove your crystal from the dirt. (May be minutes, days or even years sometimes 😉 Usually, you know because you will suddenly remember the crystal is in there. Typically, 2-24 hours is plenty. Be careful not to use wet dirt as the water can corrode the crystals.

Fire crystals are found at heat sources or derived from molten. They are forged in fires and often love to return to that remembrance. Most fire crystals are known for offering protection and absorption of intense emotion, darkness, and forces outside ourselves.

While most can withstand the destruction of a crackling fire, I have found the fire of the sun suffices in most cases. Placing your crystal in the sun for purification assists in purging.

Water crystals tend to be crystals that enhance flow, movement, emotion, and direction. Water is powerful as it offers life or destruction in a single instant. It holds memories, sound, and movement, and just as with the deep ocean waves, can hold much more than we realize. Some crystals, such as selenite, will dissolve in water, so be careful which you select. These are crystals that can be utilized by placing in water as well whether drinking or bathing.

To cleans in water, you can place in a river or fountain of moving water. My favorite is to place crystals in water and infuse them with sound.

Essential oils can be added to water for deeper intentions and charging. Speak into the water your desires and watch the ripples receive and infuse the crystals.

Using the air, smudging, and smoking crystals is the best way to assist delicate crystals and stones that will be used by multiple people. Typically, these crystals are ones that are very porous and absorb all around them. The smoke allows complete infusion without dissolving. These are the crystals easily influenced by others and therefore, we need a soft, less evasive way to get a complete cleanse (all the nooks and crannies). Most vibrant colored crystals need to be smudged through air elements to avoid color fading.

Using a basket or colander, wave smoke with a feather onto the crystal. Be sure to get all sides and underneath as well. Sage, sandalwood, pine, or cedar can be used to smudge air crystals.

Crystals are a wonderful way to connect to deeper healing. My sweetheart laughs and says I leave crystals wherever I go like fairy dust… and it’s wonderfully true!! They have become such a beautiful part of my life and I would love to support if you are adding them to yours!

Smudging kits are available for a limited time if you would like an easy way to provide care and cleansing for your crystals. Click Here

View the video of how to cleanse crystals liked below!

Need tools to cleanse your crystals?

Grab your crystal cleansing kit below while supplies last!